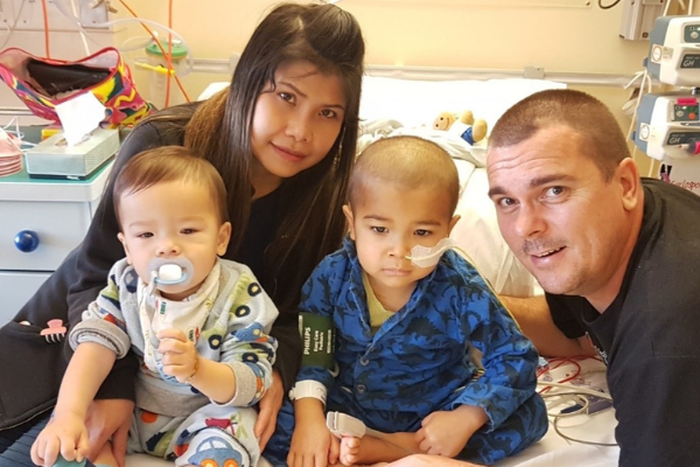 In 2014, 9-months-old Tyson was diagnosed with Chronic granulomatous disease (CGD) also known as Bridges-Good syndrome, a rare blood disorder that only one child a year in Australia is born with this condition.

CGD is a primary immune deficiency disorder that affects certain white blood cells. The disorder is characterised by an inability to resist infections caused by certain types of bacterial and fungal species and a tendency to develop chronic inflammation.

In his early years, he spent many months in and out of The Children’s Hospital at Westmead and in late 2017, he underwent a bone marrow transplant with cells from his brother.

After his bone marrow transplant, Tyson was admitted onto Camperdown Ward for 35 days with his parents, Pim and Michael, by his side. When he was eventually discharged from hospital, Tyson was under strict confinement to his home for six months due to his immunosuppressed system.

Now four years post-transplant, eight-year-old Tyson is doing extremely well and is in Year 2 at school. Like all boys his age, he loves sport and Minecraft.

Tyson's dad, Michael, didn't realise how important blood donations were until his two son’s lives depended on it. After promising himself that he would help other families going through a similar situation, he has joined the Cancer Centre for Children’s Lifeblood team and encourages everyone to regularly donate blood and plasma at their local Red Cross donation centre. Michael recently made his first-ever plasma donation!

You can help a child today by making a blood or plasma donation at the Red Cross. Visit the Lifeblood website to get involved.