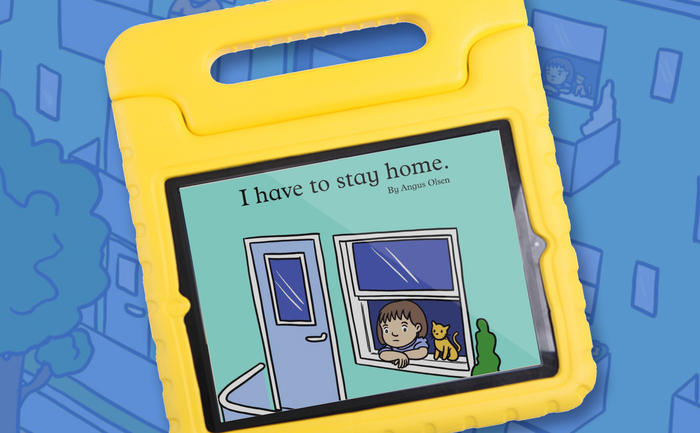 Young children are self-isolating with their families, and although many understand on some level it is because of a virus, author and illustrator Angus Olsen wrote a book to help them with the emotional side of their experience called ‘I have to stay home’.

A few years ago, Angus’s family experienced the need to isolate as Jane, his youngest daughter, had a compromised immune system when undergoing treatment in the Cancer Centre for Children at The Children’s Hospital at Westmead.

During the current pandemic, though, isolating has become a global phenomenon. “My kids have done this before, because all kids with cancer have to isolate to protect themselves during treatment and I think a lot of people are getting a lot more empathy for their situation as a result,” said Angus, recognising how difficult the isolation can be for all people now doing it.

Although the scientific aspects of Coronavirus are often dealt with, less has been written about the emotional side of it. “There was a lot about COVID-19 for children, specifically about cells and very complicated things, but there wasn’t much addressing the emotional side of what young children were having to do when isolating,” said Angus.

A Swedish friend, Erik Lennestål, whose child was anxious, contacted Angus asking him to do something focussed on the emotional side of isolating, prompting the book to be written.

Angus decided to locate the child, who is the focus of the book, in an apartment after viewing footage of what was happening in Italy at the time with people confined to high density living arrangements waving and socialising with neighbours from a distance on their own balconies.

After being published in early April, on the I draw childhood cancer Facebook page, that Angus uploads his work to, the book has become increasingly popular in many parts of the world.

“The response has been excellent,” said Angus. “It’s been used in a lot of European countries and it’s also popular in Mexico.”

The book is positive way to help children between the ages of two and five understand that although they may be isolating, they are not alone.

Read or download a free PDF of I have to stay home.

Read other books by Angus for young children including I need a Central Line, I need a Port, I need a PEG Tube, My NG book and My Cancer on his new website.