What are clinical trials?

Thursday 30 January 2020 in News from the Cancer Centre 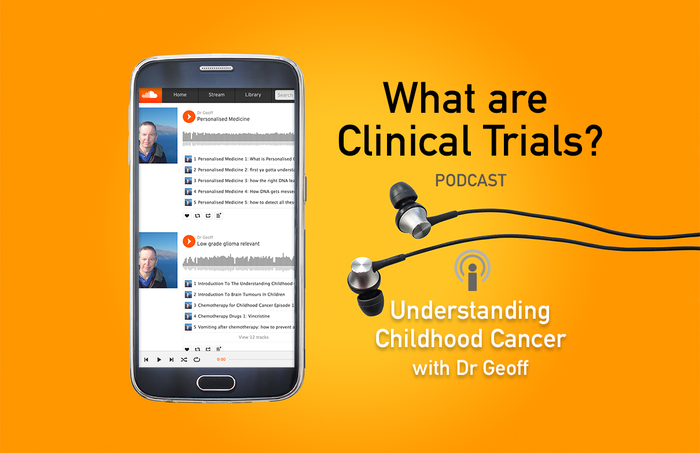 Dr Geoff McCowage, a Senior Paediatric Oncologist at The Children’s Hospital at Westmead, has created 43 podcasts in everyday language for people interested in understanding childhood cancer and its treatments. The podcasts are on Soundcloud and iTunes and can be downloaded free of charge to mobile devices and computers by searching for 'Understanding Childhood Cancer with Dr Geoff'.

The What are Clinical Trials? podcast is transcribed below. You can listen to it here.

What are clinical trials?

For the first time I want to talk about clinical trials. If you have a child that is undergoing treatment for cancer or leukaemia there is a good chance that somebody has approached you and said ‘well, we have a clinical trial going, would you like to participate?’ and they probably presented you with 25 page consent forms and told you all about the trial to see if you want to participate.

So first off, what is a clinical trial? Well, you all know that there is a lot of medical research that goes on, and there are people toiling away in labs for years doing all sorts of experiments with test tubes et cetera. Now, most of the time you wouldn’t think of that as a clinical trial. No. You mostly think of clinical trials as being research that involves actual patients, actual human beings, as the research subjects.

Definition of a clinical trial

Notice they say ‘humans’, but they don’t actually say ‘patients’. You can do a clinical trial with people who are not patients. That is, completely normal people. You can do a clinical trial on them. You can get volunteers to take a certain medicine and describe whether it tastes bad or not, for instance, and they might not have anything wrong with them. But if the medicine is sufficiently safe, and if it is not going to have side effects, and if everyone knows their rights well, the ethics committee might say ‘yes, you can do that sort of clinical trial’ even though the people are completely healthy. Seems to me it’s always medical students that get recruited to that sort of thing. But anyway, let’s look at that NIH definition.

The NIH want to see if things are safe and effective; the two different sort of goals you have in clinical trials. For instance, with a new drug that has never been given to human beings at all, the first step is to give it and to see if it is actually safe to give to human beings. So, in a first human study the main goal is going to be ‘is it safe?’ and I’ll talk about that in the Phase 1 studies podcast that will come shortly. The next step is to see if a certain strategy, treatment or device is effective. So, the next step after you’ve worked out something is safe to do, then the usual next step is to see, well, does it actually work? Is there any benefit from it? And then, after that, you might say okay, we’ve shown that there seems to be some benefit from this strategy, treatment, or device, but is it better than the old treatment?

The other thing to notice from the definition is that it is not just about drugs. It’s a medical strategy, a treatment, or a device. So, a strategy, for instance, if someone has severe arthritis in their knee might be lifestyle changes: lose weight and change the style of exercise they do. Do some swimming, hydrotherapy and maybe see if all that works out better in delaying the need for surgery compared to just going on drugs. So that would be a strategy that’s being evaluated.

Or, it might be a strategy of doing chest X-rays on people who smoke and doing a chest X-ray every year to see if we can find cancer before the patient actually gets sick with the cancer. That would be a strategy.

So, it is a medical strategy, treatment, or device. Treatment? So that can obviously be a trial of a certain drug. Is the drug safe to give? Is the drug effective to give? But there are other forms of treatment. Is taking out the gallbladder through a laparoscope safe and effective compared to doing it with an open cut of the abdomen? Is training people in mindfulness meditation an effective treatment for anxiety in people who have chronic heart disease? Does physiotherapy, or physical therapy, improve athletes’ ability to get back on the running track. It’s a treatment and it’s being evaluated – that’s a clinical trial.

So, all of these things are clinical trials, and all of them would be subject to some level of oversight by the hospital’s ethics committee, or the Institutional Review Board maybe, supervised by the Food and Drug Administration in the United States, or the TGA in Australia and the EMA in Europe. All sorts or regulatory agencies would be looking over these clinical trials to check that they are being done ethically, that patients’ rights are being respected, that if they are testing things in children it is because they really need to be tested in children and not adults.

All sorts of regulatory oversight would be in place, ethics committees, independent data monitoring, safety committees – all sorts of processes are in place and I’ll talk about that in a later podcast too.

Patients only participate in clinical trials if they agree to it so normally, informed consent needs to be obtained. Normally we would need a process of explaining what the trial is to a patient. We need to present the ethics committee approved consent forms, that is the IRB approved consent forms in the United States, and those forms have to document what’s going to happen, how it differs from normal therapies, what the risks are, and what the prospects for benefits are. And we have to talk about the patient’s rights, the fact they are not compelled to be in a clinical trial, that they have the right to bow out of a clinical trial, that if they don’t want to be in a clinical trial then they will still get good care at the hospital and it won’t compromise their relationship with the hospital et cetera.

Another thing I’d say to you is that a unit conducting clinical trials, particularly multinational huge, great clinical trials, and a unit that is getting audited by the Clinical Trials group and passing all their audits, well, that should suggest to you that that unit is delivering care that is contemporary, that is cutting edge, that the treatment is comparable to what you would be getting at major centres elsewhere around the world.

It really is a good sort of quality assurance thing, almost an indicator to you that a given unit is functioning at a high level and very contemporary in their approach.

Clinical trials are researched to try to document if a medical strategy, a treatment, or a device is safe and effective.

So, I’ll leave it there. Thank you again for tuning in to Understanding Childhood Cancer. I’m Dr Geoff and I’ll talk to you next time. Bye now.