Josh wore a facemask for leukaemia, now he sells them for charity

Sunday 4 October 2020 in News from the Cancer Centre 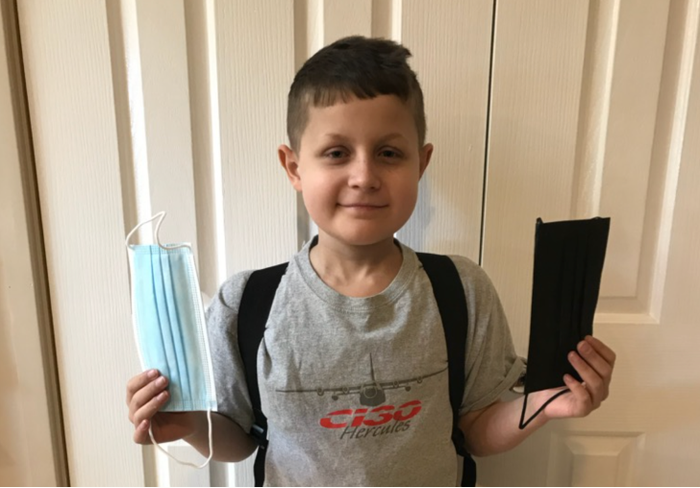 Coronavirus precautions have seen facemasks recommended in some parts of Australia and mandated in others, such as Victoria, but nine-year-old Josh was wearing them long before their current high profile.

“In February 2018 I was diagnosed with leukaemia and later that year had a bone marrow transplant in the Cancer Centre for Children. My immunity really dropped and after I got out of hospital, I had to wear a mask,” says Josh.

“Whenever I go out in public I wear a mask, and now everyone’s wearing them.”

Another factor affecting his immunity was the loss of childhood immunisations through the transplant, observed his mother, Kerryn.

“When you have a bone marrow transplant you lose all your childhood immunisations, so you have to get reimmunised, and Josh’s immunity is not quite good enough to do that yet. That’s part of why he wears a mask when we’re in public and every time we go to the hospital.”

Coronavirus created a new community need for face masks and Josh and his family thought, why not buy a lot of disposable ones to sell and donate money to charity? It was an opportunity to be involved in a fledgling aspect of virus precautions, that has since escalated in importance.

“Whenever I got money for birthdays or Christmas mum always encouraged me to give some to charity, so I’ve always done that,” says Josh.

“We sold the first 1000 pretty quickly, for a dollar each, but at the same time I needed a lung biopsy, which is a big operation, so I was in the Close Observation Unit for a while and our phone was running hot with lots of orders. Sometimes seven a day, and they were all for 10 or 20 masks. Business was really booming.”

He donated the profit to Central Coast Kids in Need, which helps children who live far away from medical services to access them, and purchased more masks.

The new batch sold nicely, despite competing with new sellers, but they don’t think they’ll invest in a third. By selling the masks, though, they’ve helped a charity that’s close to their hearts having been introduced to it by Toby, a good friend they met while undergoing treatment, who sadly passed away recently.

Josh has noticed it can be difficult, at first, to recognise people under their masks. “When I go to places like the shopping centre, and see someone I know, sometimes I don’t recognise them at first, but then we chat and it doesn’t really make a difference.”

Masks have played an important role in protecting Josh, and now the wider community are benefitting from them. They are an easy way to help protect ourselves … something Josh knows about!

Read about Oncology nurse, Lauren, who wears a facemask. It’s still her helping kids and smiling underneath it though!