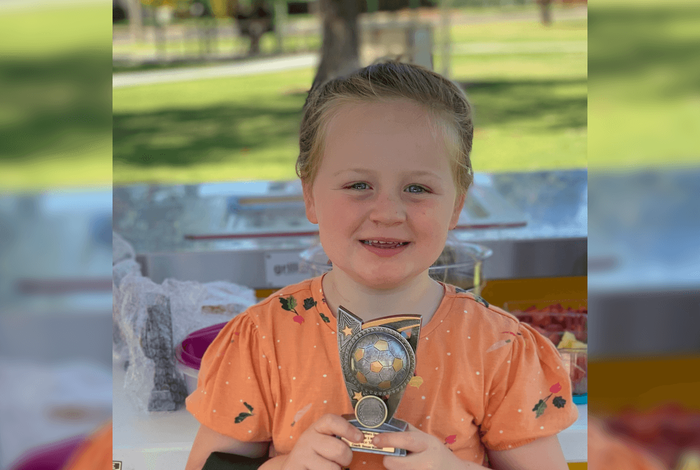 A silver trophy with gold stars takes pride of place on Grace’s bedside table. It is a reward for an outstanding soccer season in which she seemed to run forever, scored lots of goals, and got to play with a special group of friends from pre-school.

To see her daughter being such an active and enthusiastic part of the team felt like a triumph says her mother, Sarah.  “Grace broke her femur in 2017, and then she had lots of chemotherapy, but three years later her leg is completely healed and she is playing a full game of soccer, which is amazing.”

Scans show Grace, 5, is clear of the rare kidney cancer she was being treated for, and with her newfound energy she keeps busy doing activities she loves.

Swimming is a priority, and Grace points out,” I could stay in the pool all day.”

Her constant companion is a gorgeous little French bulldog from the Make a Wish charity, named Gecko, and every day she checks to see if her brood of chickens have laid any eggs.

“I’ve got a special chicken called Smokey and it’s got a beautiful colour because it has brown and black on it,” says Grace.

As she looks to the future, next year can’t come quick enough, as not only will Grace start primary school, and she’s more than ready, but she’ll also get to play soccer again and she can’t wait to strap her boots on as this year was a resounding success.